Earlier today Nutanix made two very interesting annouments and while it is still early to know how much impact it will have in the market place, I still believe both announcements are correct moves for Nutanix.

The first announcement was that Nutanix software stack is now supported on HPE hardware. First thing first, this is not an OEM relashionship like what Nutanix has with DellEMC or Lenovo, this is what they call meet-in-the-channel solution. With this approach customers buys HPE hardware that is on the Nutanix Hardware Firmware Compatability List (HFCL) from their HPE partner and get the Nutanix Software Stack from their Nutanix Partner that could also help to create the solution.

The HPE solution is scheduled to be available later this year, Q4-2017. Nutanix is validating two specific server models, DL360-G9 and DL380-G9. For the DL360’s Nutanix is planning on supporting All-Flash and Hybrid models and the DL380-G9 will be supported as a hybrid model. This solution will be well recieved in Europe where HPE is one the major hardware vendors.

From a support perspective this offering is very similar to the Nutanix offering on Cisco hardware and following the great support Nutanix has its customers accustomed to, they didn’t lower the bar here.

As with any other software you put on bare metal hardware, one will always call the software vendor first to make sure the issue is not software related unless is clearly a hardware issue, but if one is not sure where to start, Nutanix is suggesting to call thier support first. Once triage identify that the hardware could be the issue, they will engage TSA Net for a clean handoff and to keep customer satisfaction at its best.

The second announcement and in my hubble opinion, the biggest of the two announcements is the “Nutanix Go Program” 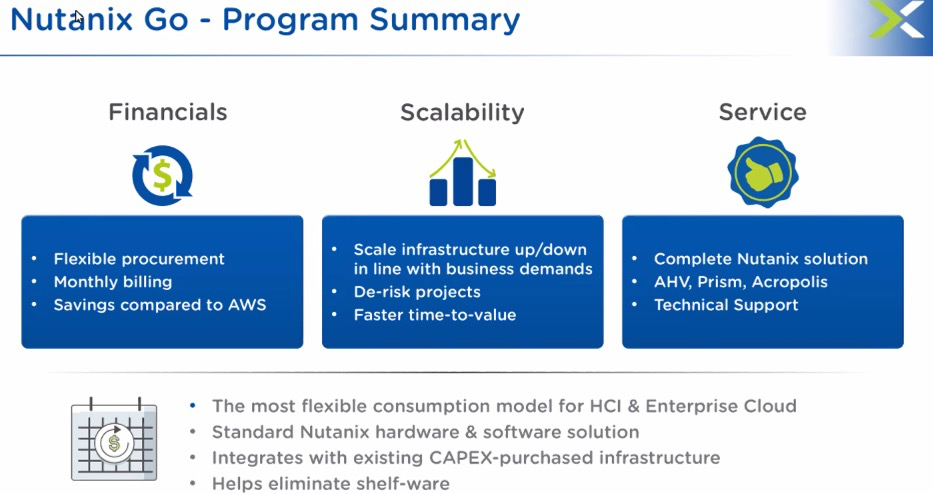 This new Nutanix program allows the customer to have Nutanix branded hardware on a pay as you go type of consumption model. The program provides the customer with monthly billing transforming the hardware from CAPEX to OPEX making the procurement process simpler.

With this new program customers can sign up for two different agreements. The first is the the short-term agreement which can be signed for 6 or 12 months and the long-term agreement which comes in 2, 3 or 5 years. While the minimum sign up agreement is 6-months term, renewals can be done for as little as 3-months terms. As in with many subscription / lease programs, the longer you sing up for the better pricing.

If you are a current Nutanix customer and already own a cluster, don’t worry the program allows you to add rented resources to the same cluster, which means one can mix rented and owned hardwared. The program will start in the US only first with the intention of slowly roll it out to other countries the second part of 2017.

The program is currently targeted to the enterprise market, so customers must sign in for a minimum of 12-nodes, which is quite a big commitment in my opinion. I would like this program to start at 4-nodes so we can include mid market customers and up. On the flip side, at the end of the program terms, the customer can return the hardware no questions asked.

This shows once again that Nutanix is more a software company with great vision than a hardware company.

Thank you for reading.